PLAV Post 14 has a long and proud history as an American veteran's organization in Central New York.  It was originally formed by World War I Army veterans who were either immigrants from Poland or of Polish descent.  They sought to come together as a group in order to maintain and preserve the spirit of fraternity and patriotism.  They also sought to perpetuate their friendships through mutual aid and by participation in patriotic, charitable, educational and civic activities.  Today, Post 14 is made up of men and women of all racial and ethnic backgrounds who served their nation as veterans from all conflicts and eras and all services and components.  We seek to do the same as our fellow veterans who came before us, to remain linked to one another in tribute to their legacy and to the memory of those who have fallen in service to our nation and the ideals for which it stands.
​
According to a history of Post 14 written in the early 1980s, History of "E. Jablonowski” Post #14: "On January 31, 1930, a group of veterans, Polish by Heritage, from World War I and twenty-one in number, sat down in a Polish kitchen and took upon themselves the task of organizing a veterans post to be incorporated into the Polish Legion of American Veterans. Thus was born the Eugene Jablonowski Post #14."

It is unknown at this time who the 21 veterans of World War I were. However, at least one of the 118 members listed on Kosciuszko Park Memorial dedicated in 1935, John J. Dobbs, was not of Polish descent. Dobbs was a past commander of Post 14 and an organizer of the PLAV Drum and Bugle Corps. He died in 1966 and is buried in Assumption Cemetery. One of his sons, John R. Dobbs was a Syracuse Police Officer.

No mention is made about why the post was named for Eugeniusz Jablonowski. Jablonowski was a Private in the U.S. Army assigned to Company F, 9th Infantry Regiment, 2nd Division. He was part of a group of ten men, parishioners of Transfiguration Church from Syracuse’s East side who enlisted in the Regular Army in May of 1917. He was killed in action on July 18, 1918 during the Battle of Soissons. He is buried in Oise-Aisne American Cemetery, France. A number of the post’s founding members enlisted with Jablonowski. Two of them, Alexander Wyrwas and Felix Wolpink, were also in Co. F, 9th Infantry. Another man, Frank Piwowarski (spelled Piwowarsky) was a part of the group from Syracuse was also assigned to Co. F and killed in action on the same day as Jablonowski.


Pvt. Eugeniusz Jablonowski was born in Bagienice, Poland on May 23, 1897 to Aleksander and Domicela (nee Jabłonowski). Bagienice was a village in the administrative district (Gmina) of Chorzele, within Przasnysz County, Masovian Voivodeship, in east-central Poland. Eugeniusz arrived to the United States on the ship “Kleist” out of Bremen, Germany on April 21, 1913.  The ship's manifest showed that his final destination was to his brother Bronislaw’s home, 134 Burnet Avenue in Syracuse.  He had $25 on his person, was 5 feet, 1 inches tall, had fair complexion, blond hair and blue eyes.

We still don't have a lot of details about the brief four years of Eugeniusz's life from the time of his arrival to the U.S. in April of 1913 to the time he enlisted in the U.S. Army in May of 1917.  We know that he came to the U.S. to join his brother Bronislaw, who was known as “Bruno,” and his sister Wladyslawa, who was known as “Lottie” and later “Laura” and married to Vincent Czaplicki.

Eugeniusz died on July 18, 1918 at 21 years of age as part of the Company F, 9th Infantry Regiment, 2nd Infantry Division during the Battle of Soissons. He is buried in Plot C, Row 8, Grave 11 of the Oise-Aisne American Cemetery in Fere-en-Tardenois, France under the name of “Eugenius Jablonowski.” As one of the first Syracuseans and the first Polish-American from Syracuse killed in action during World War I, the Syracuse Polish Legion of American Veterans (PLAV) - USA, Post 14 is named “E. Jablonowski” in his honor.

According to an August 30, 1918 article in the Syracuse Journal reporting Pvt. Jablonowski as being killed in action: “ten to one is the price the men of the 'Fighting Ninth' exacted in their first five trips to the front line to enter the grim battle against the Huns. And that Pvt. Eugeniusz Jablonowski ‘got’ his ten before they got him is evidenced by his letter to his brother shortly before he again went into action and was killed.” The paper attributed a lengthy segment in a letter that Eugeniusz wrote to his brother Bronislaw:

“'God help me, I'll go after them Huns until they got me,' wrote Pvt. Eugeniusz Jablonowski, of the Ninth Regiment to his brother, Bronislaw Jablonowski, of 315 Greenway av., before going into action for the sixth time on July 18, when he was killed by a Hun bullet. 'I have been in the thick of it five times. The trenches were my abode for 10 to 20 days at a time. We attacked the Huns five times and each time they got more than their share. Our boys fell also, but for every one of ours, 10 of their number paid. I had my bayonet in action during every attack and I am proud to say I have accounted for a few Huns myself. I'm going into action for the sixth time, and if God helps me I'll come out again, and will write you more.'
Eugene Jablonowski enlisted in the United States Army a year ago last May and was assigned to a company in the Ninth Regiment, then stationed at Camp Syracuse. Early last fall he went overseas. He enlisted with nine other boys of the East Side, all members of the Polish Falcon Society, Nest No. 33. Born in Bagience [sic], Poland, 21 years ago, he came to Syracuse six years ago, and lived in this city until his enlistment.
​
He was a communicant of the Church of the Transfiguration, and a member of St. Stanislaus Kostka Society of that church. Besides his brother, he is survived by his sister, Mrs. Vincent [Władysława, called Lottie] Czaplicki of 1417 Burnet av.”

Our Post owes a debt of gratitude to Ewa Przedpełska, the great-granddaughter of Stanisława Jabłonowski, Eugeniusz’s sister!  Ewa kindly provided invaluable help by obtaining information about the Jabłonowski family from Bagienice in Poland through discussions with her 90 year old grandfather and from family documents.  She also arranged for the translation of birth records from Russian into Polish and completed the Jabłonowski family tree for Eugeniusz's siblings.  ​Dziękujemy serdecznie za pomoc! 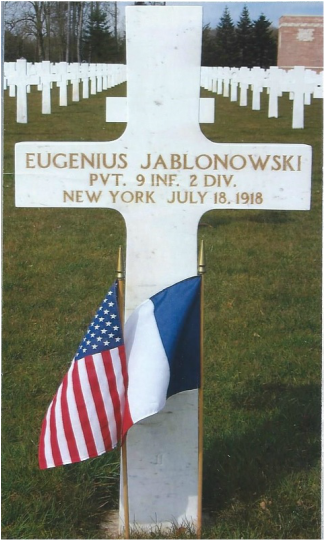